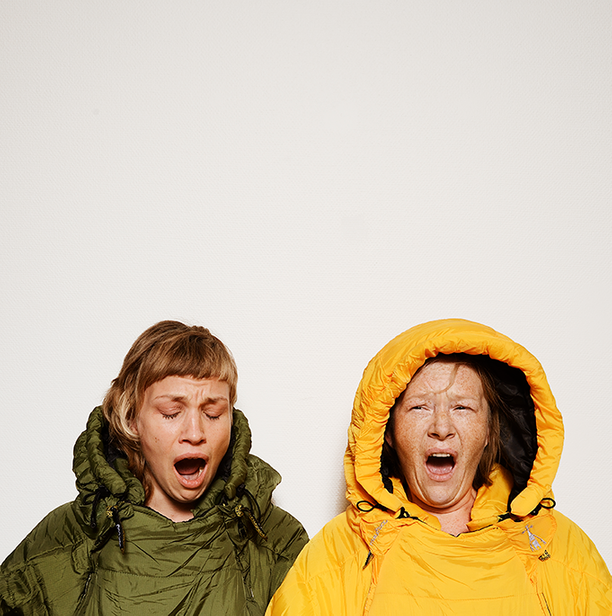 The Disengaged Free Jazz Orchestra is the performance duo Maria Stiernborg and Kajsa Wadhia. Together they investigate symptoms of illnesses produced by society as artistic strategies and political resistance.

If capitalism relies on our capacity to create new, to be superflexible and to get moved not through communication of complex information but through signs and symbols moving us into affect, if arbitrary power infiltrates our subjectivities, colonises our potentialities and exhausts our possibilities, if the artist is a role model for the precariat worker, and creativitiy the main commodity of late capitalism, then: What can the role of the artist be today?

Rather than looking for solutions, they enter into dysfunctional systems. Rather than producing new they follow the current tendencies as artist parasites. Tendencies and consequences of accelerating capitalism, such as exhaustion, paranoia and schizophrenic intensities, provide working methods and material. They investigate what happens if we do not try to make things easy, but instead allow for frictions and delays by using disengagement, anti-relational aesthetics, obstruction, rigidity, nonsense, repetition, slowness and illogic as artistic methods.

The work of The Disengaged Free Jazz Orchestra produces a retraction by reinforcing a fourth wall, a barrier between the work and the audience as a protest against the use of the artists subjectivity as a brand or commodity and a protection both for the performers and the audience from the exhaustion of intersubjectivity.

Kajsa Wadhia is educated in contemporary dance and performance at London Contemporary Dance School and the Laban Centre in London, and the Master Programme New Performative Practices at DOCH, Stockholm. From 2016 she is co-directing Köttinspektionen Dans >>> in Uppsala with Tove Salmgren. She places her artistic practice in the context of an over-productive and accelerating society and as a response, reverses exhaustion into resistance and anti-climax into fulfilment.

Maria Stiernborg holds a Bachelor from Stockholm Academy of Dramatic Arts and a Master from Konstfack, Art in the Public Realm. She works in performance, theatre and text och is mainly thinking about how the artist can be the least useful or productive, and how that, as a practice, can communicate to an audience. She is also co-directing Förlaget >>> with Ludvig Uhlbors since 2012.