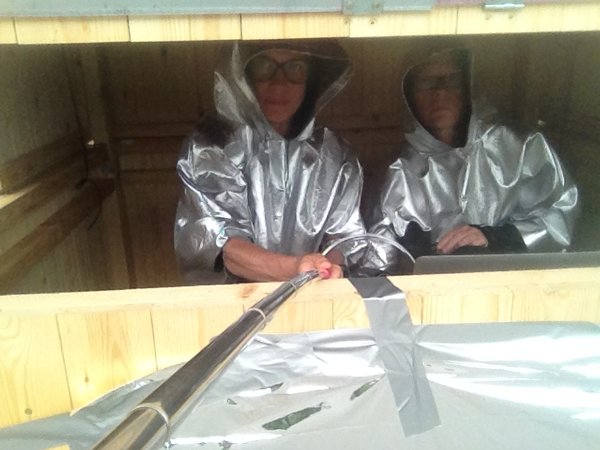 Jackrabbit Parole is a low intensity performance and ongoing research that unfolds during a four weeks residency in a tower outside of MDT>>> in Skeppsholmen, Stockholm. The tower is used as a watch tower, signal tower, hiding place, studio and stage. Spectators can choose to stay for shorter or longer periods, and the work is ongoing, also without an audience.

Jackrabbit Parole is an attempt to escape from accelerating capitalism, from an arbitrary power that infiltrates our emotions and desires. It is a breakout doomed to failure, a collection of highly unreliable artistic experiments with the purpose to parasitise the illness of society and invert its symptoms into resistence. The performance duo embrace their own paranoia and schizophrenic tendensies and try to trick the system by putting its own rottenness to use.

Supported by Kulturbryggan and MDT

Testing a solid forth wall within the frame of the workshop Performance as Sculpture, with Nicole Bachmann, at Konstfack.

Testing an embroidable forth wall.